Why Say No to Emulsifiers?

Have you had clients say to you, “I use my moisturiser daily but my skin still feels dry!” Or “I feel I need to re-apply my moisturiser twice a day because my skin always feels dry!” Or have you had a client use up all of her moisturiser in half the time she should? If so, these are indications of the “washout effect” of emulsifiers and how they can exacerbate fast trans-epidermal water loss and lipid dryness.

Many therapists are also unaware that emulsifiers do not lose their emulsifying properties in the skin and have been found to be higher irritant properties than fragrance or preservatives. This is because emulsifiers are proving to cause a modification of the stratum corneum multilamellar lipid structure (Bilayers) and consequently the skin barrier defences.

Moreover, their use is largely unregulated and considered an easy and inexpensive way of combining the oil and water phases of an emulsion.
Most emulsifiers can be considered “surface-active agents”. This property means that they are able to reduce the surface tension of water. Which means that they float within the interfaces between aqueous and oily phases and thus form links – the essential precondition for emulsifiers, and an emulsion is created.

When surface active agents are used to combine the water and oil phases of cream, they are called emulsifiers. When used for skin cleansing purposes, surface active agents are referred to as tensides or surfactants.
Skin tolerance of these substances may vary; anionic short-chained combinations such as lauryl sulphates and also lauryl ether sulphates may cause skin irritations. They are also widely used among other components of food and cleaning agents, lubricants, and colour cosmetics.

Emulsions
These are one of the most common forms of cosmetic products. You ﬁnd them in skin lotions, make-up, and even hair products. By deﬁnition, an emulsion is a dispersion of two or more immiscible (normally incapable of being mixed) materials. Where one phase, also known as the internal or dispersed phase, is dispersed in the continuous or external phase.

Simple cosmetic emulsions are classiﬁed as:

Oil in water emulsions is usually the most common in formulations due to lower production cost, ease of application and light texture. (Typical use: moisturiser)

A moisturising cream is a mixture of water and oil substances and referred to as an oil and water based cream O/W. A small amount of oil into a large amount of water.

Under normal circumstances, oil and water cannot be mixed without a substance that blends the two phases.  Wherever oils and waxes are mixed water emulsifiers are used, with the objective of obtaining a stable mixture that lasts.

Emulsifiers are surface-active agents which means that they float within the interfaces between aqueous and oily phases and thus form links – the essential precondition for emulsifiers.
What makes an emulsiﬁer “surface active” is related to the size of the hydrophilic (water-loving or polar) portion of a molecule as compared to the size of the lipophilic (oil-loving or non-polar) portion.

When used for skin cleansing purposes, surface active agents are referred to as tensides or surfactants. When used to combine the water and oil phases of cream, they are called emulsifiers. Surfactants and emulsifiers have a surface-active ion that are either positively or negatively charged; or contains no charge or have a dual charge as seen in amphoteric surfactants.

The ionic charge is the key when classifying surfactants and emulsiﬁers, as the properties differ according to their ionic charge and the fatty acid that makes up the oil-soluble portion of the surface-active agent.

Negatively charged Anionic surfactants are the most commonly used cosmetic emulsiﬁers because they are cheap and stable. This emulsifier is the most widely used type of surfactant for laundering,dishwashing liquids, and shampoos because of its excellent cleaning properties and high foaming potential.

Skin tolerance of these substances may vary. Anionic short-chained combinations such as lauryl sulphates and also lauryl ether sulphates may cause skin irritations. They are also widely used among others components of food and cleaning agents, lubricants, and colour cosmetics.

Emulsifiers do not lose their emulsifying properties in the skin.
Emulsifiers have been found to be higher irritants than fragrance or preservatives because they are proving to cause a modification of the stratum corneum multilamellar lipid structure. Despite this, their use is largely unregulated and is considered an easy and inexpensive way of combining the oil and water phases of an emulsion. Note that cost is the prime directive.

The lasting emulsifying capacity of the emulsifiers penetrated into the skin causes an increased transport of skin-own protective substances such as the multilamellar lipids out of the skin especially when the skin comes in contact with water. This is called the ‘wash out’ effect. 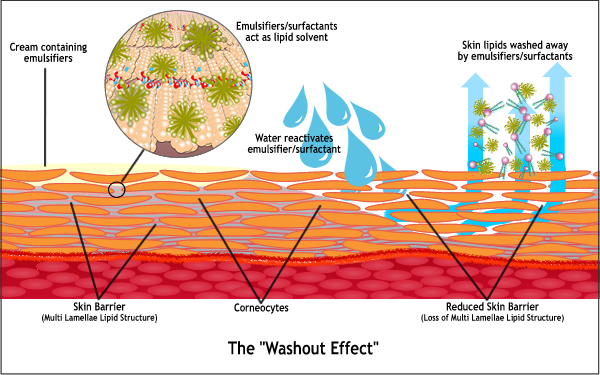 For this reason, conventional creams are not tolerated by consumers with barrier disorder skin problems such as atopic dermatitis and psoriasis. A combination of weakened skin and chemicals will very often aggravate atopic dermatitis or create inflammation that may present as localized heat, itchiness, and redness.

Emulsifier free
Many creams will aggravate a skin that has lost the ﬁrst lines of skin barrier defence, and consequently there is a growing market for “cream substitutes” for skins that need an artiﬁcial skin barrier defence without the risk of side effects that more conventional creams may cause.
The answer is derma membrane structure creams, (DMS creams) these creams have formulations that do not contain conventional emulsiﬁers. Instead of emulsifiers these creams contain membrane components with a physical structure comparable to the barrier layers of the skin.  Instead they contain physiological lipids that mirror the lipid component of the skin such as ceramides, phospholipids, EFA’s and hydrated phosphatidylcholine.

A long time has been spent on researching bases which are more compatible to the physiological properties of the skin than the conventional O/W or W/O emulsions, and from the liposome and nanoparticles technologies, this concept was born. This approach avoids conventional additives like emulsiﬁers, perfumes, mineral oils, silicones and emulsiﬁers.

There is a big surge toward derma membrane structure creams (DMS creams) that have a physical structure similar to the skin’s barrier defense layers. With a chemical composition similar to skin physiology and is emulsifier free, these creams are becoming popular as a vehicle or base for modern skin care dermatological preparations and topically applied medications. However, because of the technology and knowledge required in creating derma membrane structure creams, the developers of domestic retail market products are unlikely to offer these advanced type of creams for quite some time.

All preventative treatment should aim to maintain the skin barrier in its best possible natural and intact condition. This can only be achieved with external agents that are able to repair the natural barrier and will not impair the regeneration from within. So it is obvious to use agents similar to those the body uses itself.

Mimic is the term often used. Analysis will show that the TEWL of disordered skin decreases significantly; and skin lipid level and hydration increases after application of DMS base creams.
Barrier Creams such as Lamellar Creams and Oleogels are used for Skin Protection (prevention) and Corneotherapy (therapy). Adjuvant Corneotherapy consists of Pharmaceutical Therapy (drugs) and Corneotherapy (skin care) at the same time.
This is an exciting time to be in the skin treatment industry; with many changes now being made to render those old formulations a thing of the past.