Is cellulite different from fat? Yes, there is a difference, despite what many an over-worked and harassed GP will argue. Under the microscope, the components of both fat and cellulite look the same, but that’s where any similarity ends.

To understand why there is a difference, and what the skin treatment therapist can do to help treat the cellulite condition, we need to understand fat, and it’s role in the body. It is a common misconception that cellulite is brown fat. In fact, the adult body has very little or no brown fat, this being replaced with white fat rapidly from birth through early childhood.

Fat tissue
Fat, or adipose tissue, is found in several places in the human body, with the location of where it resides under the skin (in the fibrillar network of connective tissue set between the superficial dermal layer and the muscular mass) being driven by the sex hormones estrogen and testosterone. Consequently, each gender has its own specific locales of accumulation, with adult males tending to carry body fat in the chest, abdomen and buttocks, producing an apple” body shape, while adult females predisposed to carry fat in their breasts, hips, waist and buttocks, creating a “pear” body shape.

Fat tissue is made up of one of two types of fat cells: white or brown. The most predominant white fat cells are large cells that have very little cytoplasm, only 15 percent cell volume, a small nucleus and one large fat droplet that makes up 85 percent of cell volume. The white fat cells play important roles of energy storage and metabolism, provision of heat insulation and mechanical cushioning.

The very few brown fat cells left in the adult body are somewhat smaller, are loaded with mitochondria and are composed of several smaller fat droplets. The mitochondria in the brown cells consume the fat within the cell to generate heat. (Thermogenesis) Consequently, deposits of brown fat is found almost exclusively in newborn babies, as it is the babys means of keeping warm until feeding starts to fill its white fat cells.

Fat cells are formed in the developing foetus during the third trimester of pregnancy, and later at the onset of puberty, when the sex hormones “kick in.” It is during puberty that the differences in fat distribution between men and women begin to take form.
One amazing fact is that fat cells do not multiply after puberty, and as the body stores more fat, the number of fat cells remains the same. Each fat cell simply gets bigger!

How fat enters the body, how it is processed and arrives at its resident locations is a complex and fascinating journey of biochemistry and outside the scope of this article. (more information can be found here) More relevant is how and why fat is metabolised as fuel or retained as a fat deposit or cellulite.

Excess fat accumulates from the storage of nutrients the body doesn’t use. The human body metabolizes excess caloric intake, whether from carbohydrates, lipids or proteins into triglycerides for storage in the vacuoles of fat cells. (Adipocytes) This fat storage in normal circumstances is spread widely over the body surface with tendencies to accumulate where the inherited body shape dictates.
Cellulite will form more readily in women due to an inherent difference in the underlying connective tissue structure. In women, the subcutaneous structure is said to form an almost mattress-like construction at the interface between the dermis and hypodermis, with minute parallel strands attaching the skin to the underlying structure. It is where these strands anchor the skin, the characteristic pockets of ‘peau-de-orange” skin, or depressions of cellulite, may appear.

Cellulite is also considered an inherited condition. There is a body type that will show the cellulite condition despite how low the overall body weight is. ( See photo at left)
These pockets of cellulite can be found in the gynous regions: hips, bottom, at the top of the thighs and sometimes the knees.
Cellulite can also be developed by excess fat storage, which will aggravate the inherent anomalies in enzymatic or hormonal functions that diminish lipolytic enzyme levels or accelerate the biosynthesis of enzymes that favour lipid accumulation.
This type of cellulite is more wide spread over the body, and is always found with a moderate/severe weight problem and is compounded by a sedentary/negative lifestyle and poor eating habits.

Formation of Cellulite
Cellulite has been defined as a four-step process, beginning with a normal, pre-cellulite skin.
The thigh area is the body area most susceptible to cellulite accumulation and the area targeted for the action of most cellulite treatment products. 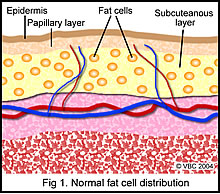 Normal Skin
Normal thigh area skin is quite healthy; in the pre-cellulite condition there is a thick epidermis (0.10 – 0.15mm) with a good reproductive activity in the basal layer. The surface is smooth and firm, with the dermis also healthy and being quite thick, (1-2mm) with little sun damage.The capillaries extend up into the uppermost regions of the dermis providing a good blood supply of nutrients and clearing fluids.

Ultrasound scans of normal thigh area tissue also show a dense tissue development with little retained fluid, the fibroblasts are quite active, with no accumulation of cross-linked collagen or elastin nodules.
The fat cells beneath the dermis are active, with no clumping, and are quite distinct and of normal diameter, (not engorged with excess fat) Moreover, no fat deposits protrude into the dermal region.

Cellulite formation stages
Stage 1: The first events in cellulite formation are invisible, occurring at the cellular and molecular level. A dermal deterioration is the hallmark of the first stage of cellulite formation. Blood vessel integrity breaks down, with the upper dermal region showing a loss of capillary networks.
This is not unlike the deterioration associated with sun damage. Fat cells become engorged with lipid, often swelling to two or three times their original size, and begin clumping together. An excess of fluid is retained in the dermal and sub dermal regions. Fluid accumulation is most likely due to the capillary breakdown, but whether this is a cause or an effect of the disturbed fat metabolism is a subject of debate.

Stage 2: In the second stage of cellulite development, the tissue at the sub dermal and dermal levels has deteriorated; blood vessels in the afflicted area are disrupted. Some regions have normal microcirculation while adjacent regions can have markedly reduced blood flow. Fat cells engorged with lipid, clump together in the skin fat layer. This exacerbates the microcirculation problem, with the blood vessels being pushed away by the regions rich in fat deposits. In addition, fluids tend to accumulate, increasing the problem in the sub-surface region. The surface effects are minimal, yet the “orange peel’ look of the skin can now be detected. In general, a surface lumpiness or unevenness can be seen.

Stage 3: This stage is a continuation of the process in stage 2. Vascular deterioration begins to effect changes in the dermis, resulting in a less active dermal metabolism. This affects the protein synthesis and repair processes, (proteosomal decline) with protein deposits forming around the fat cells. In addition, the micro-circulatory and lymphatic systems are unable to function efficiently, unable to bathe cells with nourishing fluids and dispose of wastes. This creates a toxic situation for all cells in the dermal and epidermal area.

Stage 4: This final stage of cellulite is marked by hard nodules in the dermal region, comprised of clumps of fat cells surrounded by a hard reticular protein layer. (See fig.2) The surface displays considerable unevenness, and can feel bruised when pressed or pinched. In addition the tissue is slow to return in shape and colour after pressure. (Impaired lymphatic) 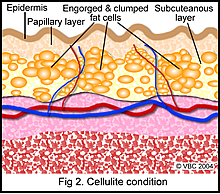 Summary of Cellulite Factors Cellulite differs from normal fat because of how it is retained and formed in to its distinctive appearance. It is not simply an effect of having excess fat. Cellulite can be found in thin, normal, and over weight women, and is a secondary feminine sexual characteristic, appearing only after puberty with the increasing influence of sexual hormones.
The most common factors of cellulite formation are venous and lymphatic inefficiency, sedentary lifestyles, and metabolism problems. (Women with cellulite often have a high level of cholesterol)

Other aggravating factors include menopause, (due to the slowing down of the metabolism) obesity and pregnancy, (due to circulatory deficiencies and habitual poor posture) the contraceptive pill, (stimulation of some women’s appetite, and cause water retention) and stress.
Hereditary/Racial characteristics can also play a significant role in cellulite development, but are aggravated by one or more of the above.

Treating Cellulite
Treating the causative conditions as a group or individually is the best practice, (depending on the approach of the therapist) but all will have to be addressed to get a satisfactory and long term result.
A combination of salon treatments and take-home care products will ensure some effect, however if used individually only a partial result will usually be achieved.
More importantly, both therapist and client must be dedicated to the program for lengthy periods of time, (some 4-6 months), as it must be remembered that it took many years to develop the cellulite condition, and it is not going to vanish over night.
If the cellulite is not too intrinsic (hereditary) and localised, it can only be seriously addressed by a change in the work/play lifestyle that exacerbated the condition in the first place. Only then can both therapist and client look forward to a satisfactory result.