Skin Colour will help you with your diagnosis: Skin analysis of the sensitive skin

The skin obtains its pink, fleshy appearance from the red pigment called haemoglobin in the blood flowing through the vascular network of tiny veins, arteries and capillaries known as the microcirculation. This large network of capillaries function to control the cutaneous blood flow in response to the bodies thermo-regulatory (control of temperature) needs.

If the ambient temperature exceeds that of the body, blood flow is increased. Conversely if the ambient temperature is markedly lower than that of the body, the blood flow is reduced. When these small capillaries loose their elasticity to accommodate changes in pressure and flow, they remain dilated, with maximum flow occurring and colour remaining.

The network of capillaries in the neck and facial area of the skin is much denser than the torso or limbs.

As a result it is one of the first areas of the body to show a colour change due to a change in blood flow or pressure. Sensitive skins are characterised by patches of blotchy redness caused by the dilation of the walls of the peripheral blood vessels. 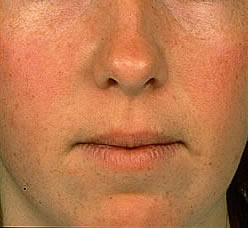 This vaso-dilation can be either temporary or permanent. Localised areas commonly affected are the nose tip, nose wings, cheeks, pre-auricular region (front of ears) upper chin and the sides of the neck or throat. A rapid increase of colour intensity from the surface capillaries and the dermal vascular network due to temperature change or friction is considered to be solid evidence of thin and sensitive skin.

The thickness of the epidermal and dermal layers of sensitive skin can be visually judged by observing colour change. In many cases, diffused redness and couprose are combined together however, diffused redness alone can be seen without any visible blood capillaries. Skin displaying these characteristics should be treated as “hypersensitive”.

Sensitivity due to allergic reactions to specific substances is generally caused by antibodies in the blood formed after exposure to the offending substance. Primary allergen include pollen, dust, medication, antibiotics, sunscreen, deodorants and steroids such as cortisone. (for more sensitising ingredients read article on adverse reactions to cosmetic ingredients and Allergy “action or reaction”)

Vascular disorders of the skin can take many forms, and are either congenital (intrinsic) or developed (extrinsic). The commonly manifest themselves as highly visible red coloured abnormalities and are caused by a localised over growth or permanent dilation of peripheral blood vessels.

The older terminology used by the beauty therapist of hyper sensitive, couprose, or telangiectasias have been replaced with the use of rosacea grades 1 to 5.

Grade 5 Would encompass the old acne rosacea and of course rhinophyma type of skin conditions.

Rosacea is not an uncommon disorder affecting the face, and is characterised by easy blushability, facial telangiectasias, spider naevus, or centro-facial papules (with the absence of comedones) (acne rosacea). It can appear in a localised form on the nose, cheeks and forehead, and in severe cases appears aggressed and flaky. (EFAD)

Early symptoms are a persistent redness of the nose and cheeks, the redness gradually becoming more constant. It is frequently found in fair skinned people of Celtic origin but any nationality can develop rosacea. Rosacea can develop at any age, in either sex, but is more often found in women between 30 and 50 years of age, the skin showing extreme sensitivity to cosmetics. Aggravating factors in work/play lifestyle will affect rosacea, alcohol, spicy foods, medication, cigarettes, UVR, menopause, pregnancy, and extremes of temperature just to name a few.

Client consultation will often show that hay fever, allergies, eczema, asthma or arthritis have been part of the medical history, and that an assortment of medication has been used over the years. Most medication for these types of conditions is vaso-dilative, all having an effect on the micro-circulatory system with prolonged use.

To understand and diagnose the “rosacea skin” its important to have a comprehensive knowledge of the skin, its immune systems and the role they play in protection.

Your best key to diagnose a sensitive skin: WHEN IN DOUBT – GO SENSITIVE