Cell Immortality: The Secrets of Telomerase

Two variations on the theory of ageing dominate thought at the moment.
One is that ageing is “built into the system”, irrevocable and only slightly affected by external factors.

The other states that the ageing process is dramatically influenced by external factors.The general consensus of opinion is that skin ageing can be dramatically accelerated by extremes in environmental factors (i.e., photoageing of skin and carcinogenic chemicals). Biological free-radical damage, and the suppression of this chemical species by free-radical quenchers or anti-oxidants is a complex task which is necessary for life to exist

The principle ageing process is not taking place in the top layers of the skin (i.e., the stratum corneum or epidermis) but rather several millimetres below the surface in the region known as the dermis.
The slow loss of dermal mass with age, and the resulting or concurrent loss of elasticity as well as thickness, are the most obvious indicators of skin ageing. In addition muscle atrophy and laxness follow.
Secondary ageing processes appear in the epidermis in conditions such as pigmentation and keratosis.

The skin responds to a number of internally generated factors.
Very complex biochemical interactions between factors produced by various cells of the same type, different cell types and different organs. All can cause sudden as well as long term changes in the appearance of skin. In attempts to understand and ultimately affect the ravages of ageing upon skin, one must also deal with the acute and chronic hormonal changes which occur in the lifetime of human skin.

Newer technologies are moving towards more dramatic effects, requiring activity on cellular components within the skin other than keratinocytes. In addition many of the newer approaches are exploring the use of agents, which are similar, or mimic naturally occurring factors produced within the body.

Can wrinkles and the ‘aged skin’ be treated?
Before we embark any further we separate the two conditions, and the two types of aging.
Intrinsic Aging: Is mainly composed of an individuals genetic heritage and on which the person cannot act. (Individual heredity)The aging that is intrinsic could not be repaired, only halted or slowed down.
Extrinsic Aging: Is the reflection of the individuals work/play lifestyle (UVR, environment, diet, and disease) and how she or he copes with this lifestyle. Result: the aging skin and ‘aged skin’.Wrinkles are one of the end results of the extrinsically induced aging skin.

Wrinkles are the one of the end results of the aging skin. It would be fair to say these wrinkles and other skin conditions found in an ‘aged skin’ could easily be reduced in severity by prevention of exposure to UVR and FREE RADICALS, and DIET as we know these are the biggest aggravating factors to creating an ‘aged skin’.

This article is a small insight into the intrinsic aspect of skin/cell aging. Intrinsic aging is mainly composed of an individuals genetic heritage and on which the person cannot act. (Individual heredity) The aging that is intrinsic could not be repaired, only halted or slowed down.

Telomeres
What makes cells mortal? Research findings on cellular senescence may explain not only the life span potential of cells, but also cancer and human mortality.

Most cells regenerate themselves by dividing to form a pair of new cells. In 1961, scientist L. Hayflick discovered that cells eventually reach a limit beyond which they cannot continue to divide (Hayflick L et al., 1961; Hayflick L, 1965). In a now-famous series of experiments, Hayflick demonstrated that cultured human fibroblasts (connective tissue cells) can divide only about 60 to 80 times.

When a cell reaches this “Hayflick Limit” it enters into a twilight state called cellular senescence. Senescent cells are very much aliveyet they are distorted in both form and function.

The intrinsic aspect of aging is hereditary. Based on the genes that are inherited from the family gene pool.

Telomeres are small segments of DNA which coat the tips of chromosomes, and are an

integral part of that inherited aspect of aging.

These telomeres are necessary for life and function to prevent the chromosomes from unraveling.

After some 80 cell divisions the telomere becomes so short that the cells stop dividing and the cell enters a state of senescence and dies. 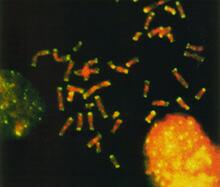 This shortening of our telomeres appears to be the cellular clock that determines the number of times our cells divide which, in turn, appears to control the aging of our cells. And despite our best efforts that clock keeps ticking. For it is the progressive shortening of our telomeres that may be a cause (or the cause) of cellular aging, and which weakens our chromosomes to the point where cell division is no longer possible!

Telomerase is an enzyme that repairs damaged telomeres.
Telomerase, can reset telomeres back to their youthful lengths, suggesting the possibility of radical extension of the healthy human life span in the near future. But not necessarily correct an aged skin.

Analysis has shown that in the absence of telomerase we lose 50-200 nucleotides from the telomeres at the ends our chromosomes every time one of our cells divide.

But most human cells stop making telomerase early in life and, therefore, creating the Biological Time Bomb that kills us in our 70’s and 80’s.
This whole process is genetic or intrinsic, the type/life of telomeres you have is inherited.

One could imagine that if we could extend the life of our existing telomeres and stimulate telomerase, we would have found the secret to cell immortality, but so far no fabulous new ingredient has been developed that will do that.
Molly the cloned sheep is part of that research that might find the answer.