Acne is a unique skin condition due to it having so many foundations in the basic diagnostic characteristics of texture, colour and secretions. (With the most obvious being colour due to the inflammation)
It is because there are these foundations that there is often confusion where to start when it comes to embarking of an effective treatment.
Many skin treatment therapists immediately go to the secretions (oil) aspect to begin a treatment program because of their understanding of the condition from prior learning.
Other therapists will look at the colour aspect, because they feel the inflammation that is the major symptom should be addressed first.

Surprisingly, some learned therapists go straight to the texture aspect, and more specifically the investigation of excess keratinisation to address the problem.
The fact that therapists approach to acne is varied makes acne both a unique and controversial skin condition.
Controversial because many curriculums and texts related to beauty therapy and skin care still embrace the obsolete concept that the condition is being caused primarily by oily skin.

It is only in recent years it has been discovered that in a high number of cases, the oiliness has only been a contributing factor, and not the basic cause.

The physiology and biology of acne
Of course, to fully understand acne, we must understand the physiology and biology of the condition. This can only happen by updating our knowledge on the structure and functions of the various systems that contribute to causing the condition, with these systems being the pilo-sebaceous duct/sebaceous unit, and in the case of hormonal mediated acne, the endocrine systems.
We begin with the pilo-sebaceous duct/gland, not because the oil it produces is the cause of acne, but because the pilosebaceous unit is the site of response of the inflammatory action of acne.
These P. Acnes produce an enzyme (lipases) that hydrolyses the triglycerides into free fatty acids and glycerol. This glycerol is metabolised, and the free fatty acid is released. It is these free fatty acids that are responsible for the acidic pH.

An oily/active skin is an indicator that a greater than usual amount of sebum is produced by the sebaceous gland cell, and it is therefore logical to assume that if this is the case, there would be a higher than normal amount of free fatty acids metabolised.

Free Fatty Acids an Aggravating Factor
When the Acid Mantle was impaired in any way, and the P acnes bacteria had none of its preferred food source or had no place to reside due to surface environmental changes, it is logical to assume they would move to the next nearest food source of triglycerides, and this would be within the sebaceous gland itself.
Here, the P acnes bacteria would continue converting triglycerides, which would continue the creation of the FFAs.

Unfortunately in this environment, the FFAs would be considered a foreign body within the gland and trigger an inflammatory process.

This may occur in a number of ways, because not only does the P. acnes break down triglycerides, they can also release chemical messages that can attract a type of phagocytic white blood cell (neutophils).
These white cells in turn release enzymes that can breakdown a cell wall and cause an inflammatory process.
In addition, P. acnes also cause the release of the protein digesting enzymes called proteases.
The penetration of these enzymes into surrounding dermis may further aggravate the inflammatory processes already in place.

Excess Keratinisation: A major contributing cause of Acne
We can see how an abundance of sebum can start an inflammatory response, however this combination of oily skin and diffused redness is not yet acne, as there is one more factor that triggers the acne process. This factor is excess keratinisation.
So what does excess keratinisation have to do with acne? Consider this: What happens if the pilosebaceous duct entrance becomes blocked? This could happen due to a number of factors:

1. Essential fatty acid deficiency (EFAD) will prevent the complete formation of the bilayers that are responsible for corneocyte adhesion and TEWL.

2. There is a lack of free water in the epidermis for the stimulation of the enzymes responsible for the dissolution of the desmosomes that tether the keratinocyte cell to each other

3. Oxygenation loss causing slow cell turnover and lazy sebaceous secretions is another cause that must be considered.

4. The simplest is a build up of dead skin cells (excess keratinisation) caused by neglect or UVR (end of summer suntan)

One of the most common causes for those with a problem skin are the foaming cleansers with harsh surfactants in the formulation, or blemish drying agents like benzyl peroxide. These both cause surface dryness and consequently, excess keratinisation.

It is the excess keratinisation that causes the pilosebaceous duct entrance to be blocked, resulting in closed or open comedones. This blockage prevents any oil reaching the skin surface, consequently trapping the P. acnes bacteria within the gland.

The P. acnes bacteria is able to survive in this environment due to their anaerobic nature an unlimited supply of triglycerides.
The resulting continual conversion of these triglycerides to FFAs fuels an inflammatory response that is also trapped within the blocked duct. The result is a pustule. The chart showing the composition of the lipids that make up the sebaceous cells secretions exemplifies this.
You will note that free fatty acids are not a normal part of this secretion, however they are present in comedones.

I made the statement in an earlier paragraph that free fatty acids can have pro-inflammatory and comedogenic properties, particularly if there is an over abundance of them.
There is a lot of controversy about the comedogenic properties of some cosmetic chemicals such as FFAs, and most of it is factual, however we must put the effects of these ingredients in to perspective relative to prevalent skin conditions.
The chart below shows the major fatty acids found in the acid mantle.
You will note that the ones Marked in red text are the FFAs that are comedogenic when used in cosmetic formulations. It is logical to understand that if a skin has an overabundance of FFAs, and oily skins often do, and an application of a cosmetic that also contains more FFAs is applied regularly and left on, on a daily basis (E.g. a foundation) problems will arise.
These problems may appear as closed or open comedones that could become pustules if left to fester. 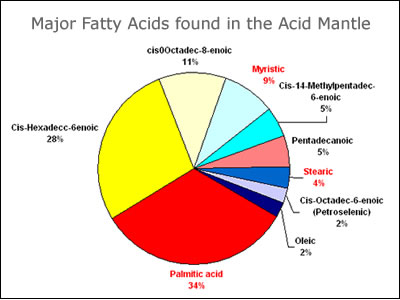 Now, I want to be very clear here, these free fatty acids only become a problem when the basic majority skin type (intrinsic) is oily.
I must stress that they are not a problem for lipid dry skins, in fact quite the reverse, because a lipid dry skin is lacking in skin lipids.
Comedogenic substances in cosmetics are a major cause of congestion related skin problems, and as a skin treatment therapist you must be vigilant and knowledgeable on these matters to be considered a professional.
Practice your cosmetic chemistry and continue to learn as much as you can, particularly about cosmetics sold via supermarket and retail stores. You will become very knowledgeable about what is available and how it affects different kinds of skins. This further reinforces why your clients must bring all of their skin care and makeup with them to the consultation. (The cause could be there)

There is so much more to Acne than just pustules and papules, but to fully understand the cause means you can set a truly effective treatment program in place.

So far we have looked at the sebaceous gland and its relationship with the P. acnes bacteria, and the role this bacterium plays in the inflammatory process of a comedone and a pustule, however this is only half the acne story.
In our next installment, we will look at antibiotic resistant acne.