The well-being of the skin is vital to the elimination of wastes through sudation (sweating) and transpiration (breathing). The natural hydrolipic film is an emulsion which covers the entire skins surface.
It is a complex fluid, entirely formed by substances excreted from the sudiferous and sebaceous glands, epidermic lipids and NMF. and is a product of the skins own metabolism.
The hydrolipic film also contains a very important fatty acid substance called 7 dehydro cholesterol. The UV. rays of the sun have a direct action on 7 dehydro cholesterol, producing Vitamin D. This Vit D is absorbed into blood stream and utilised within the body to ensure the satisfactory development and maintenance of bone tissue and the proper utilisation of calcium and phosphorous.
The hydrolipic film is created through two naturally occurring phases. They are the liposoluble phase and the hydrosoluble phase.

Liposoluble Phase:
The hydrolipic film is created through two naturally occurring phases. They are the liposoluble phase and the hydrosoluble phase.
The oily phase or liposoluble phase is from the sebaceous secretion which originates in the sebaceous gland closely attached to hair follicles, and the epidermic lipids of the bilayers of the stratum corneum.
Spread over the entire skins surface except the palmar and plantar surfaces, the sebaceous glands predominate at the level of the face in the T zone and the back. The oily phase is a mixture of fatty secretions associated the with lipids of epidermal origin and is slightly acid.

Quantitative variations of hydrolipic film also exist as a function of age, sex, external conditions and the individual state of health. Male hormones – androgens ( in women produced in adrenal glands) stimulates secretion of seborrheic fatty elements.
The epidermic lipids depend partly on the ingested lipids in the diet, along with the differentiation process of the keratinocyte. Here again the cause is hormonal. the endocrine system produces its hormonal secretions and as a consequence there is a gradual decrease of sebum. Age also alter the quality of sebum by reducing the amount of free fatty acids; this modifies the emulsion, changing the pH balance.

Hydrosoluble Phase:
The hydrolipic film perceptively and progressively reduces with age, and the internal hydration levels of the body will be reflected by the hydrous transfer through the skin

The aqueous film on the surface of the skin is called the acid mantle or hydrolipic film. It is the skins primary defence against bacteria and is composed of sebaceous oil, sweat and epidermic secretions. The film is slightly acid and serves many essential functions. The film acts as an antiseptic, helping to prevent the growth of bacteria which can not survive in an acid environment, and helps prevent toxic matter from being absorbed into the skin. In addition to helping buffer the action of acid and alkaline chemicals, the film acts as the skins primary lubricant, controlling the hydration of the Stratum Corneum.

The acidity or alkalinity of the skin surface is directly related to the chemical balance of the hydrolipic film, and is measured by the level of pH (potential hydrogen) present.

The acidity or alkalinity of the skin surface is directly related to the chemical balance of the hydrolipic film and is measured by the level of pH (potential hydrogen) present. The pH of skin can be measured either colour-metrically (litmus paper) or electronically. The scale typically used for pH measurements ranges between 1 -14.

A substance which is neither acid or alkaline is considered to have a neutral pH. An example of such a substance is pure water, measuring a pH of 7 on the scale. The more acid a skin is, the lower the pH reading. Consequently, the more alkaline the skin, the higher the pH reading. Extremes of skin pH range between 4.4 (sensitive) to 7 (oily). A normal skin generally has a pH of 5.4 – 6.2. 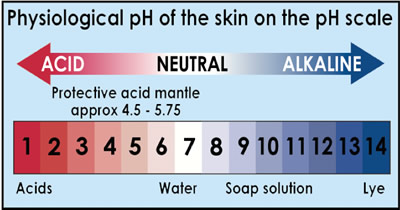 A 30 minute bath in city tap water will typically raise the skin pH to between 6.6 – 7.0, with the normalisation process (back to 5.4 – 6.2) taking about 18 to 24 hours.
The observed pH on the skins surface (average across four test sites) typically ranges from 4.8 – 6.8, however interstitial fluid and blood plasma exhibits a near neutral pH of around 7.0. This lower reading of the skin can be attributed to the acids on the surface. Washing the skin will increase the pH reading. This is due to the protective acids being diluted; or in some cases, removed.